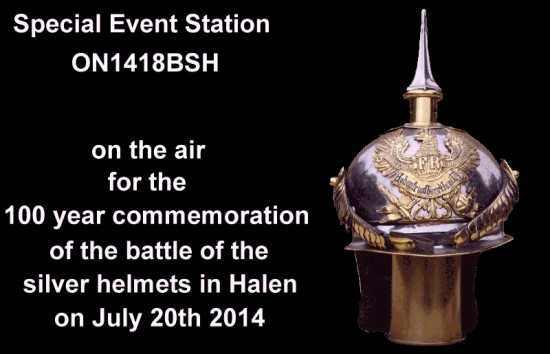 From 2014 till 2018 a lot of W.W.1 clashes of will be remembered in Belgium. The members of the "West Limburgse Radioamateurs" (Club: WLBR) are proud to take part in the commemoration of the Battle of the Silver Helmets in Halen (Limburg).
But was so special about this clash?
It was the last battle between cavalry units in Europe and it was the only victory won by the Belgians without help of their allies.
In all the Germans suffering 150 dead, 600 wounded and some 200-300 prisoners; the number of dead horses was placed at around 400. And the Belgians suffered also 150 dead. This battle has been nicknamed the Battle of the Silver Helmets for the many silvered helmets left behind by the German cuirassiers on the battlefield. The Belgian victory of the battle at Halen, had little strategic effect because the Germans captured most of Belgium over the next two months. 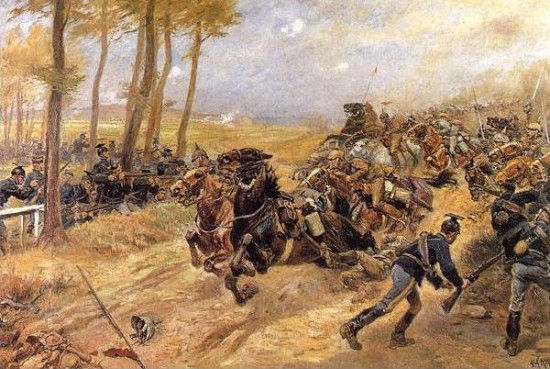 The BIPT granted the members of WLBR a license with the special callsign "ON1418BSH". BSH stands for Battle of the Silver Helmets. The special event station will be on the air on sunday the 20th of july 2014 from 9:00 o'clock locale time in the morning till.... First on 80m and later on 40m. In the afternoon you can find the station on 20m.
Visitors are welcome of course. Here is the adress: Rotemsstraat 14, 3545 Halen. The team is going to set up their station on the parking across the museum.
And there is also a Livestream avaiable on the internet: http://bit.ly/12MR97c


We hope to put you in our log on the 20th of july
Untill then....
Leon ON4VLM, Peter ON3MP, Eric ON3EE, Walter ON5WAL and guest operator Swa ON5SWA
Nach oben

But it´s not my cup of tea.